Interview with Alexa Bravo -- Author of In Bed with the Boss

The wonderfully talented Alexa Bravo agreed to stop by for a visit to fill us in on her writing process and share her steamy new release In Bed with the Boss. Let's dive right in!

Your currently released Novel is In Bed With The Boss. What are you currently working on?

I am currently working on a stand-alone follow up story to In Bed With The Boss based on a secondary character.  I was working to a very tight deadline with the first book and felt as if there was more to say.

My ultimate aim is to have a historical romance under my belt and I have now nailed down the idea to the point where I can’t wait to get it down on paper, however I’m figuring out that I work best on single projects so that will have to wait.

When you wrote In Bed With The Boss, did anything happen in the story that you didn’t expect?

Actually most of it was unexpected!  The characters started leading the way after about the fourth chapter and it felt almost like taking dictation!  It certainly made for easy writing however I can’t see that method working for more complex plots and storylines.  I look forward to challenging myself and my writing style with future projects.

Are you a quick writer? About how many words a day?

Once I have found my rhythm with a story and the characters are talking to me (and if I’m listening!) I can write extremely fast.  I have managed 25k words in a day at my writing peak.  Everyone knows to leave me alone during these times and not disturb the muse!  Eating and sleeping, of course, are optional when I’m inspired – I will sometimes emerge from a writing frenzy to wonder what time it is and how many meals I’ve missed!

Okay...let me just speak for a ton of writers, HOLY FLYING FINGERS BATGIRL! 25K in a day? My arms would fall off, head would explode...or something. Whew! So then, where is your ideal writing place?

Sitting cross-legged on the end of my bed with my laptop in front of me.  I close the door to my room and everyone knows not to disturb, though my girls insist on dropping in unannounced every so often just to give me a hug – who can argue with that?  Hugs trump muse every time!

Dogs, definitely!  I love how they love you unconditionally and welcome you home no matter how late you are or how long you’ve made them wait to be fed – they are the most loyal friend you can have.

Have you ever written something that shocked you when you read back over it? If so, what?

When In Bed With The Boss was released for pre-orders a friend pointed out that there was quite a large excerpt available to view on one website and when I visited and started reading I was sure that someone had hijacked my work and used the same character names!  I was already planning how to address the issue even as I continued reading the page but as I got into the story I decided that whoever it was had actually improved the original work by adding quite a racy tone… and whoa, that love scene…maybe I should take some notes on how they did that before I complain…hold on, is that…?  Did I write that?  What the…?  When I finally recognized that it was my own work I was shocked and a little bit awed at the steamy scene – how did I find the guts to put that down on paper and then submit it to a publisher?  I am still a bit awed by the whole process.
Have you used a personal tragedy or difficulty as basis for a scene?

Trish Carter’s meteoric rise in the corporate world is in part based on my own experiences, including her run-in with her arch-nemesis Liz Hart.  I was in a very similar situation years ago when I was promoted suddenly into a management role that nobody wanted and that everyone thought would fail.  I had my own nemesis, and had to deal with targeted persecution, though the fall-out for Trish is much nastier than it ever was for me – after all, unlike Trish I was not having an affair with my boss at the time!

Are any of your characters based on people you know?  If so, do they know it?

Trish’s nemesis Liz Hart is based on my own long-ago manager, who had to deal with my promotion to her level weeks after I was hired to report to her.  It was a very difficult situation for both of us and looking back I can understand what drove her to behavior that, as a manager myself, I can recognize as extremely flawed but human.  No, she has no idea that my character is based on her but then it’s not as if we keep in touch!

Well at the moment (and for the last year) I have been trying to convince my family that it’s perfectly reasonable for me to want to parachute out of a plane!  It’s something I’ve wanted to do forever but those closest to me abhor the perceived risk involved – the negotiations are a work in progress.  I managed to speed race around a real race track in my younger days so I got that one out of my system already! JM I envy your current racing hobby!

If you get to Southern California, let me know and we'll take a spin in my race car...perhaps literally. Have you ever written vicariously?

The scene in the elevator where Trish allows herself the freedom to just go with the moment, after months of planning and controlling everything relating to her job and promotion, is a scene I lived with her vicariously.  The scene is about forgetting responsibilities and consequences for one mad moment in time – and then of course, paying the price for the indulgence.

What is your favorite attribute in a person?

Mmmm, so many, I genuinely like people and I like learning about what makes them tick, what drives them, what motivates them.  I’d say genuineness is an attribute I value more now that I am older – I find that I am now more conscious of my limited time on this earth and I feel driven to spend that time with people who have the courage to be themselves, warts and all.

And your least favorite attribute in a person?


Going with the above theme I’d have to say that fakeness is my least favourite attribute.  There are people I have cut from my life over the years because who they appeared to be was not who they actually were, and life is too short to try and figure out whether or not what they say or do is actually what they mean to say or do – life has enough complications without adding unnecessary ones!

Did you include either of those in your current novel?

In the corporate world fakeness is as common as profit and loss statements!  People usually present the face that they think will get them what they want – their next promotion, their name on an important project, their expenses claim paid.  Trish’s boss, Rowena is a prime example of that – she is loud in extolling Trish’s triumph as if it were her own, but only around the people that count.  She doesn’t pull Trish aside, for example, and congratulate her personally – that’s a wasted time investment for an ambitious career woman like her.  Conversely, Brendan, Keith’s best friend and co-owner of the business, is a really genuine guy, worried about the staff, wanting to make things easier for his friend, wanting him to be honest with Trish and honest with himself about his feelings for her.  My current project is based on Brendan’s story and getting him his HEA – he’s definitely a worthy recipient!

Your personal or favorite motto.


“To live in fear is to live half a life” – I read that years ago and it has always stuck with me.  I use it as a personal mantra to challenge myself, to aspire to be more than I am and to not allow the fear of failure to hold me back.  It’s even more relevant now that I’m a published author – a writer’s ego is such a fragile thing, unbeatable one moment and shattered into a million pieces the next.  Bring on the next review! 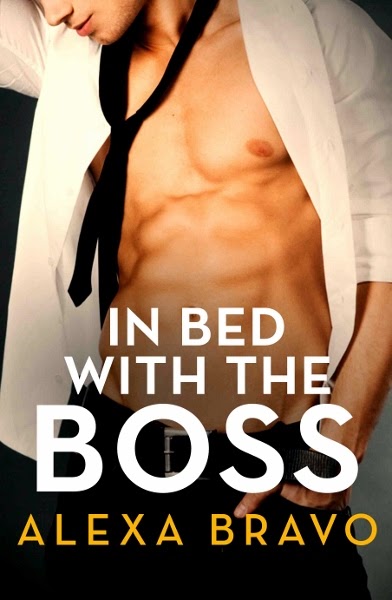 Trish Carter is chasing the career opportunity of a lifetime, and nothing is going to stand in her way.  After a failed marriage and years of self-doubt, she needs her business proposal to succeed, and there’s only one hurdle left: presenting to the Board of Directors and charismatic CEO, Keith Donnelli.  So it can only be the stress and extreme tension that leads her to jump the hot stranger in the elevator.
But the unexpectedly explosive encounter puts all her plans in jeopardy, when the stranger isn’t a stranger at all.  Now, her whole future rides on how well she can resist the temptation of sleeping with her boss.   Will Trish finally have the chance to make her secret dreams come true or will following her heart destroy her chance at a future?

Alexa Bravo “self-published” her first manuscript at age 12, when she typed a one-page romance story in the seventh grade and gave it to the girl sitting next to her in class to read.  Before she knew it the story had been passed along from classmate to classmate and Alexa was getting requests for more stories and taking reservations for those already in circulation.  Alexa has always been passionate about reading as well as writing and despite her “real job” managing a business, she enjoys as many romance novels as she can fit into her e-reader and also works on her own romantic stories.  Alexa is currently completing Brendan’s story based on a secondary character from In Bed With The Boss, and she also has several works in progress covering other genres, including historical romance.  Alexa lives in Sydney, Australia with her three beautiful girls and her very indulgent husband.