Tag! You're it! Interview

Another fantastic GUTGAA member tagged me with this interview.  Thanks Lindsey!

What is the working title of your book?

Tearing the Shroud is the current incarnation.  It started life as Tearing the Veil, but I felt the images associated with “Shroud” work better. Hopefully, it will be a keeper.
Where did the idea com from for the book?
In many religious writings, there are references to someone seeing a reality alongside our own.  The Bible mentions it in 2 Kings 6:17.  In that moment, they didn't see into "heaven", but something here on earth, just out of normal perception.  It's not a unique concept, but I've approached how that other world works and interacts with ours in a fresh and entertaining way.

What genre does your book fall under?
Adult Paranormal seems to fit best.  The characters are college age, there is sorcery, and unusual things take place here, so I suppose it could slip into Urban Fantasy fairly well too.

Which actors would you choose to play your characters in a movie rendition?
My story has two male MC’s, for Vincent I think Robbie Amell would work and for Coleman Alex Pettyfer strikes the right chord.  For Jule, that’s a tough one.  In The Flying Scotsman, there is a scene where a minister is talking to the cyclist and a picture is shown of his deceased wife.  Whoever she was it caused me to pause the movie and say “Oh my gosh, that’s Jule!”  Besides her, perhaps Italia Ricci, Leighton Meester or some undiscovered actress with a cute tooth. (you’ll have to read the book). 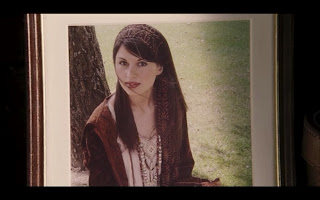 Who is this woman from The Flying Scotsman?

What is a one sentence synopsis of your book?
Vincent has visions about someone who will tear the shroud of our reality and with the help of a warrior from another realm of being named Coleman and Vincent's friends, he tries to stop him.

Will your book be self-published or represented by and agent?
I'm going the traditional route and will pair with an agent.

How long did it take you to write the first draft of your manuscript?
About twenty-three years and six months.  Yes, I’m serious.  Twenty-three or so years ago, I wrote the first thirty pages.  Life intervened, and those pages sat in a notebook at the back of my desk drawer.  I moved it from desk to desk and we moved a lot so I’m really surprised it survived.  In mid 2011 I opened it, re-read those pages and thought, “I think there’s still a story here.”  I finished the first draft about six months later.

What else about your book might pique the reader's interest?
The book is set in 1984, so get out your tight jeans and pop in a CD of The Cure.  There are strong love stories woven throughout and, cue dramatic music, someone important dies!  The plot is intricate, but its an easy novel to read.  In my "real job" I work at changing people's perceptions of themselves and where they stand in the grand scheme of things.  Here I just wanted them to enjoy a fun story.  So, relax, read, and have fun!

Clare Dugmore
Posted by Unknown at 8:51 AM