They make the world what it is. Some are great and others…not so much. In moments of deep contemplation, I’ve wondered how some came to be. One of them involves the first people to eat chicken eggs. Have you ever wondered about that conversation?

Over the course of my life I’ve had ideas, ones that would or could have changed things drastically, if I’d only known how to capitalize on them. So, for a bit of fun, I’m posting a few, all of these and their timing are absolutely true. Honest.

When I was eight, in 1969, we were in the mountains at a cabin playing in the snow. I’d learned to waterski two years before and ridden a skateboard since the same age. (it had CLAY wheels) My family were at various places on the steep hill we were sliding down and I decided to take our toboggan for a run solo. The idea came to me that I could stand on it. So with my mom shouting that I was going to kill myself and what was I doing…off I went. Just like a skateboard…or the snow boards that wouldn’t come around for years.  If I’d have only known. 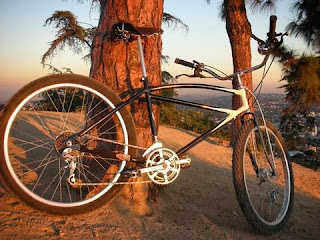 The next year, I told my dad that I wanted to have a bicycle I could rind anywhere, even over logs and up steep dirt trails One with like eight-teen gears and grippy tires. I even asked my dad to help me build one. He told me “no one would ever want something like that.” Four years later the first rudimentary mountain bike showed up at the West Coast Cyclocross Championships. If only he’d have listened.

As crazy as this last one sounds, it really happened. A few years before PayPal emerged, I was frantically trying to find someone who could help me set up an intermediary so people could use their credit card securely on the net. I only had the idea, not the ability or right connections to make it happen.

Now I have the privilege of letting my ideas run rampant in the stories I write. Writing isn't a chore, it's an honor to be able to do, it's a glorious, wonderful adventure. Writing novels is already taking me places I’d never imagined and who knows, maybe they’ll even sell.

What ideas do you have floating around? What stories are working their way from your depths?